This device appears to be nothing but beads on a string, sometimes with the ends tied together to form a necklace. (It does not count as an item worn around the neck for the purpose of determining which of a character’s worn magic items is effective.) If a character hold it, however, all can see the strand as it really is – a golden chain from which hangs a number of golden spheres. The spheres are detachable by the wearer (and only by the wearer), who can hurl one of them up to 70 feet. When a sphere arrives at the end of its trajectory, it detonates as a Fireball spell (Reflex DC14 half).

Carrying a Necklace of Fireballs comes with risk. Should you fail a saving throw against a magical fire attack, then the necklace must make a save as well (with a save bonus of +7). Failure means that all remaining spheres detonate simultaneously, often with regrettable consequences for the wearer. 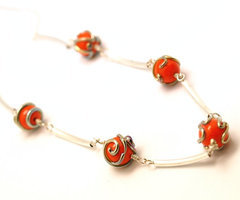