A red-haired vixen with geometric facial tattoos and a bone to pick with Cauldron.

Triel Eldurast was a major player in a plot to steal Cauldron’s Wands of Control Water during the 1300-1301 Flood Season. Without the PCs help to recover them, the city may have faced major damage, both structural and loss of life, during the floods if Cauldron couldn’t come up with the ransom she demanded.

Triel was a skilled warrior and priestess of Hextor, god of tyranny. As a member of the Ebon Triad, she sought to merge her unholy god with Vecna and Erythnul, creating one great overdeity to overthrow all others.

Triel kept her hair short and messy, but it worked for her. She armed herself with a heavy flail, which she was highly skilled with, and wore spiked full plate armor. When forewarned of potential battle, she could cast various spells on herself to make her a force to be reckoned with. 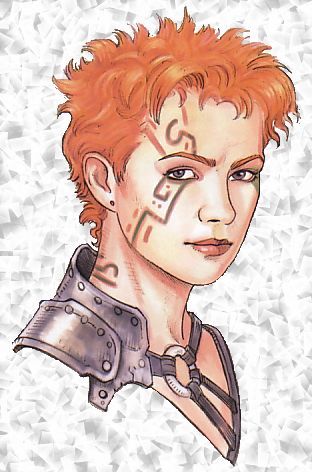