Shensen has long silver hair, dusky skin, and is nimble and athletic. She’s a member of the Striders of Fharlanghn and was, until recently, the keeper of The Wanderer’s chapel at the Lucky Monkey roadhouse.

As a child, Shensen was raised in a monastery and trained as a monk. When her elders turned away a wounded bard who sought protection from wrongful punishment at the hands of an angry mob, she went against the wishes of her elders and let the bard into the monastery through a secret door. When her actions were discovered, the monks turned the bard over to mob (which quickly lynched him) and exiled Shensen.

The experience left her embittered toward the overly ordered and detached lifestyle of the monk, and although she retains some of the training she gained, she never returned to that lifestyle. Instead, she became an explorer and wandering storyteller, combining the social graces of a minstrel with a reverence for nature.

Eventually, she encountered the Striders of Fharlanghn and joined their ranks, and for the past year she’s been the attendant caretaker of the chapel of Fharlanghn at the Lucky Monkey. 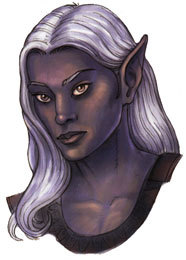