A skilled local lockmaker. This gnome has a dour demeanor, but he possesses a sly wit and disarming manner.

Keygan Ghelve is 110 years old with salt-and-pepper hair and a neatly trimmed moustache and goatee. His bushy eyebrows, creased face, and graven frown make him look frumpy and dour, but he possesses a sly wit and a disarming manner.

As the proprietor of Ghelve’s Locks, Keygan doesn’t like customers looking down on him while they’re haggling over prices. During business hours, he wears a pair of wood-and iron- stilts that clamp to his calves and wears extra-long pants to hide them.

Keygan’s rat familiar, Starbrow, was abducted by a group of skulks and are using it as leverage to force the gnome to help them in their diabolical plans to abduct and rob people throughout Cauldron.

After the events of Life’s Bazaar, Keygan was arrested for the part he played in Kazmojen’s plot. He was turned in by Sondor Ironfold, one of the abductees whose husband, Lorthan, was sold into slavery. The investigation is still underway though the prospects of him regaining his freedom look grim. 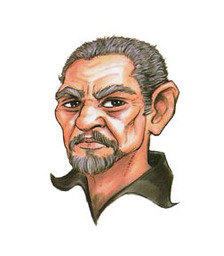